Take a trip out of Edinburgh on our Three Bridges Bus and Boat Tour. The bus will take you from the centre of Edinburgh to Queensferry, where you’ll see the three famous bridges that cross the Firth of Forth and get to explore the attractive town. You can also board a boat for a cruise on the Firth of Forth, with the option to get off and explore the island of Inchcolm and visit its famous abbey. 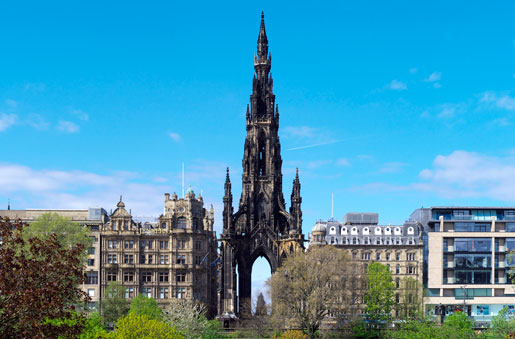 Queensferry gets its name from the fact that, in the 11th century, Queen Margaret of Scotland supposedly established a ferry service here to enable pilgrims to cross the Firth of Forth on their way north to St Andrew’s. The ferry ran for nearly 900 years until the first road bridge was opened in 1964.

Before the first road bridge though, the railway bridge was built. The Forth Bridge was opened in 1890 and when it opened, it was the longest single cantilever bridge in the world, a record it held for some 30 years. Today, the bridge is seen as a symbol of Scotland and in 2016, it was voted the country’s greatest man-made wonder by the Scottish people.

For more than 70 years, the bridge stood alone while the ferry crossed the firth below it. Then, in 1964, the first road bridge was opened. The Forth Road Bridge was another record breaker. At the time of its inauguration, it was the longest suspension bridge in the world outside the United States. Over the years, the bridge started to suffer structural issues and it had to be closed for repairs. When it opened again, it was only for public transport, such as buses and taxis, as well as cyclists and pedestrians.

To take the load that the Road Bridge could no longer take, the Queensferry Crossing was built. This bridge opened in 2017, breaking yet another record as it’s the longest triple tower cable-stayed bridge in the world. Now, the three bridges stand beside each other, each with their different role. You will also have time to explore the delightful town of Queensferry itself.

The tour also includes a cruise on the Firth of Forth itself and a chance to see the bridges from the water. You will also have the chance to visit the island of Inchcolm (the island is not visited during the winter season) and explore its ancient abbey, which has stood since the 12th century. Keep an eye out for seals, the many seabirds and maybe even porpoises!

All sales are final: tickets cannot be exchanged or money refunded by City Sightseeing.